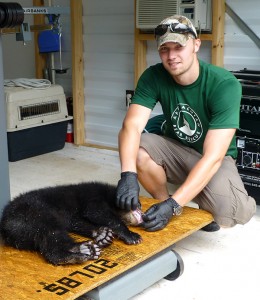 ABR Lead Curator Coy Blair graduated from The University of Tennessee with his Master’s Degree in Wildlife & Fisheries Science in December 2018.  In 2015 and 2016, Curator Coy collared and tracked 42 bears as they were released from the Appalachian Bear Rescue facility.  Most bears wore their collars for about one year.  Curator Coy used data gathered from the collars to write his Master’s Thesis, Survival and Conflict Behavior of American Black Bears after Rehabilitation.  We are proud to announce that Coy’s study has now been published in The Journal of Wildlife Management.

We sincerely thank Curator Coy’s advisers, Lisa Muller, Joseph Clark and William Stiver.  We also thank The University of Tennessee and countless others who volunteered their time, knowledge and support to make the study possible.

The study is also available online.